We read a lot in the name of science. We’re basically a research institute unto ourselves. It takes fortitude, patience, and perseverance, but we do what we do for the benefit of all of human kind. When others may be wary or hesitant, you can count on a member of our team to step up and take the plunge. We MacHalos are fearless.

So when it was brought to our attention that a young woman had a rather risque experience involving a Martian ant colony, who better to investigate than one of our very own? That’s right, you heard me: A MARTIAN ANT COLONY. You may be asking yourself, “How would that work? Ants are tiny” or  saying “I had no idea there were ants on Mars!” Trust me, we had the same reaction. That is why it was absolutely necessary to get to the bottom of this. In the name of science of course. 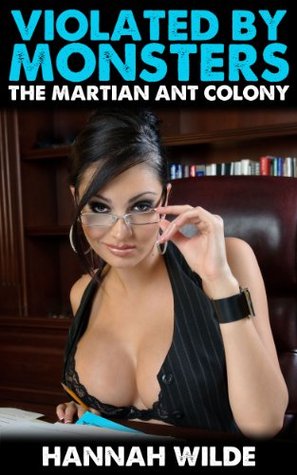 The story starts with McKenzie, a very smart and studious girl (as you can obviously tell from the above image) who just wants to be taken seriously in the professional world. It’s not her fault that she was blessed with a naturally fit physique and huge jugs, right? Anyway, she’s an assistant museum coordinator and they are getting ready to reveal their newest acquisition, if it weren’t for all the damn ants everywhere. Seriously people, call an exterminator. But a little pesky ant problem isn’t going to get in the way of the big reveal. Can you guess what their new prized possession is?

After accidentally staying late at work, fantasizing about giant monsters of all things (because she’s so professional and all), McKenzie is shaken out of her daydream by a jolting rumble. Despite her now overwhelming urge to sit in her office and masturbate, she is compelled to go downstairs. She allows this undeniable pull to lead her down into the basement and to the supply closet, where it appears the door has been chewed and a tunnel now dug out leading down into the earth. This glowing tunnel beckons McKenzie to follow, and like any girl with a good head on her shoulders, she does.

I bet you know where this is going, right?

And this, my friend, is where the ant love train begins.

Let me share a few of my favorite lines:

“The ant’s massive cock is on display for me, a red tower of sex just beaconing for my lips to be wrapped around.”

“I glance around to see that there’s an entire circle of ants lying on their backs around me, their giant red dicks standing straight up like giant rockets towards the sky from which they came”

And my favorite new term: a “sexual ant-kabob.”

So what I learned in the name of science is,

A.) It’s possible to be the perfect example of the female form with zero effort.

B.) There’s some freaky space dust or pheromones that get people wanting to get all freaky with each other and shit.

C.) Apparently ants are capable of having human-like schlongs, complete with balls and all.

D.) Well, I’ll let you figure this one out if you read the story yourself.

Look guys, this is really a public service we perform. We read this stuff so you don’t have to. Unless you want to. ‘Cause if you want to you’ll totally get no judgment from us!