It’s Friday again people! That’s right, it’s time to get our freak on. And in the name of keeping things interesting, I decided to poll some people (aka my teenagers). I asked them what came to mind when they heard the word “freaky.” Now, in hindsight I guess that could have gone horribly wrong (they are teenagers after all), but fortunately my daughter is on a bit of a horror kick. Horror movies, horror books, you get the drift. So for her, what came to mind immediately was the horror genre and a YouTube channel she follows, ObsoleteOddity. If you haven’t checked it out, here’s a chance for you to do just that. This channel showcases stories about real people and the crazy, fucked up stuff they did.

From men with a predilection for necrophilia to superstitious 18th century hipsters, this channel has it all. So I asked her to list a few of the most interesting and bizarre cases. Here’s what she came up with, and let me tell you, you may want to take a shower after reading because some of this is just nasty.

Have you ever had visions of young Cuban girls? Have you ever grown obsessed with those visions? Ever imagined keeping that young Cuban girl’s corpse as alive as a corpse can be? Odds are the answer, to the last question at the very least, is a resounding, “Not no, but hell no!” That is, of course, if you are anyone but Carl Tanzler, whose visions of girls supposedly came to him as a young child from one of his German ancestors.

As an adult, Carl Tanzler lived in Florida where he was a doctor who practiced radiology. It was during this time that he found Maria Elena Milagro de Hoyos as she was trying to get treatment for tuberculosis. He quickly became obsessed with her, identifying her as the woman of his visions. Before Tanzler could act on any of his feelings, however, she succumbed to her disease. But death was no obstacle for one as devoted as Tanzler, no siree. Two years after the death of young Maria, Tanzler could take the separation no longer and decided to act on his long suppressed urges. Claiming to have heard her voice calling to him from her tomb, he removed her from her grave and did his best to bring her back to “life” by reconstructing her body.  Although necrophiliac acts had yet to be proven at the time, later evidence points to that it was completely possible.

If you want to read more about this perverse case, you can find additional information here.

Jane Vaughn, also known as Jane Lewson, was known for her peculiarities. She found herself widowed at age 26 and was never the same again. During her long life, she managed to acquire some bizarre superstitions, superstitions that would seem odd not only today but also in the 18th century.

She only used one particular tea-cup.

She did not like the windows being washed. In fact, she forbade it out of fear that the glass would shatter.

Not only did she fear the windows being washed, she feared her body being washed with water as well. Fearing that the water would make her ill, she would only bathe with pig’s fat.

She wore clothes that were out-of-fashion before she was even born. She was a hipster before hipsters were cool.

She was so obsessed with being in good health that if anything in her house was out-of-place, she feared she would be drastically affected physically.

Who knows? Maybe she was on to something. She did manage to live to be 116 after all.

If you want to learn more about Lady Lewson and her peculiarities, make sure to check out this other post. 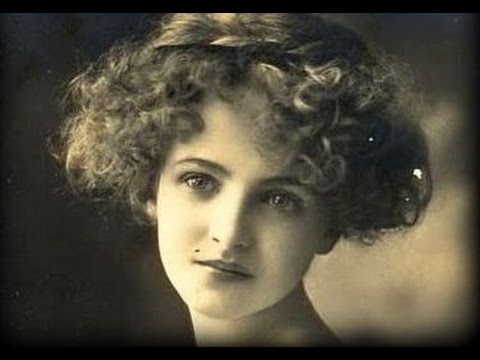 Blanche Monnier was like any other young woman in 1870’s France. She was optimistic, vivacious, and ready to fall in love and marry. As it happens, she did meet the man she wanted to spend her life with. He was an attorney, and, although he was much older and not very successful, Blanche loved him. She was eager and ready to begin this new chapter in her life. Blanche’s mother, on the other hand, was not as keen on the idea as Blanche was. It was her staunch opinion that her daughter should not marry someone of such low standards.

So, at age 25, Blanche simply vanished from the public eye. It was rumored that she may have ran off to elope with a lover. In 1901, almost a quarter of a century after her disappearance, Blanche’s true fate was discovered. The young woman had not run away and eloped with her lover, as had been speculated. Although that had been her original plan, her mother found out before it could be executed. Blanche was confined to her room until she changed her mind about marrying the lawyer. As the story goes, Blanche declared she would never change her mind, so was permanently imprisoned there. Regardless as to whether or not that part of this sad tale is true, Blanche was most assuredly locked in her room for 24 years. The care her mother gave her diminished over the years, leaving Blanche barely fed and and wasting away in her own filth.

It is not known who tipped off the police, but someone did and unfortunately it was 24 years to late. By the time she was found,  Blanche was 49 years old, weighed only 55 pounds, and was no longer mentally stable.

To read more about the tragedy of Blanche Monnier check out this site.

The story of the Papin sisters is a gruesome one. It was a murderous case that shocked 1930s France. Christine and Lea Papin were two sisters that were aged seven years apart; despite this difference, they were extremely close. They grew up in a household with a reportedly abusive father, Gustav, and a promiscuous mother, Clemence Papin. The Papin sisters had another sister, Emilia, who was supposedly raped by her father. This caused their mother to file for divorce, not out of love for her oldest child, but out of jealousy and rage at her husband’s infidelity. She thought that Emilia had seduced her husband. To prevent this from happening again, Clemence sent Christina and Emilia to live in a convent and Lea to live with a great-uncle.

This era in the Papin sisters’ lives could be described as rather peaceful and uneventful, that is until Emilia joined the convent and became a nun. Christine wished to follow in her older sister’s footsteps, putting a damper in Clemence’s plans. You see, Clamence wanted her daughters to enter to workforce so that they could send her money. This prompted her to reclaim her remaining daughters, Christine and Lea, and bring them back home.

The Papin sisters soon became maids and worked in a series of homes, including the home of the Lancelin family. Reportedly, the Lancelins treated the Papin sisters much better than most maids were treated at that time. Although they worked 12-14 hours a day, six and half days a week, the Papin sisters were allowed warm rooms and plenty of food. Supposedly, they even called Leonie (the Matriarch of the house) “maman” and referred to their own mother as “that woman.”

Despite Leonie’s kindness, she was still their employer and expected the sisters to complete the tasks they were given. One night, the power in the house stopped working. It was something that Leonie had told the Papin sisters to fix, and with the realization that they had not, Leonie flew into a rage. Supposedly, this tirade induced the Papin sisters to murder both Leonie and her daughter, Genevieve. They slashed the two women’s faces and gouged out their eyes by hand. Rene Lancelin, the patriarch of the family, soon came home and found the home shrouded in darkness. He discovered the scene and found that the only light came from candlelight in the maid’s room. He (and some other company) found the two sisters naked together in bed.

The two sisters confessed to the crime and were found guilty. Christine was identified as the main perpetrator of the crime and many had reason to believe she manipulated young Lea. At first she was sentenced to death, but that sentence was commuted to life in a psychiatric ward. Christine begged to be with her sister, but when they allowed both she and Lea to be in close proximity, Christine jumped to her and was found whispering things of sexual nature.

Christine died in 1937 while incarcerated. Lea was sentenced to 10 years in prison but was released early due to good behavior.

If you want to know more about this gruesome pair, check out this article.

What did I tell you? Necrophilia, incest, murder? This is just further proof that people can be freakier than fiction.

What would you guys like see featured in our Freaky Friday spot?

(I also want to give props to my daughter for researching and writing up the majority of the information in this post. She didn’t want me to give her any credit so shhhh, this is just between us)